Long years of economic problems, the COVID-19 pandemic, and fatigue from Lukashenko’s rule have led to massive protests.
Russia’s actions are not aimed at overthrowing Lukashenko. It seems that Moscow is trying to significantly weaken his negotiating position.
The ease with which some of his opponents were eliminated shows that Lukashenko still has a significant advantage.

Elections will be held in Belarus on the 9th of August. Alexander Lukashenko will most likely be re-elected for another term. However, opposition to his rule, which has been spanning over three decades, is growing in the country. The regime’s repression of the opposition appears to be counterproductive. Moreover, Russia is keenly interested in fuelling unrest in Belarus. For Poland, this is a very worrying situation: a possible confrontation between the regime and its citizens may isolate Minsk even more from the West, and thus bring it closer to Moscow.

A few weeks ago, during a visit to the Minsk tractor factory, Alexander Lukashenko assured listeners that a woman cannot be the president of Belarus. He stated that the constitution was not suited to it and that the society was not ready either. Comparing his country to Lithuania, where Dalia Grybauskaitė is the president, he emphasised that this is impossible in Belarus, because the leader is responsible for everything, so the power must be exercised by a man. This patriarchal vision, however, may soon be revised. The current president’s most serious rival in the elections scheduled for the 9th of August will be a woman, Sviatlana Tsikhanouskaya— a mother of two and a housewife, uninvolved in politics until recently. Her political career was created by… Alexander Lukashenko.

The Belarusian president has ruled his country for 26 years, and in the last elections, he received over 80% of the votes. In the coming days, he will run for another—sixth—term. This time, however, the Belarusian dictator has serious cause for concern. Belarusian opposition to the regime is becoming more and more visible.

In the streets the most popular demonstrations in years are taking place. Since there are no reliable support polls in Belarus, many suspects that the approval for Lukashenko has reached a record low—the mockers say it is around three per cent. That is why many believe the time has come for a change and are committed to supporting opposition candidates, despite a fear of repression. This is evidenced by the long lines of people waiting to sign the electoral registers and the thousands of people who came to the rally of the previously unknown Tsikhanouskaya.

Click the image below to watch a video: 'Belarus: Lukashenko vs the nation. Is this the end of the last European dictator? How do the dictators fall?’. English subtitles are available! 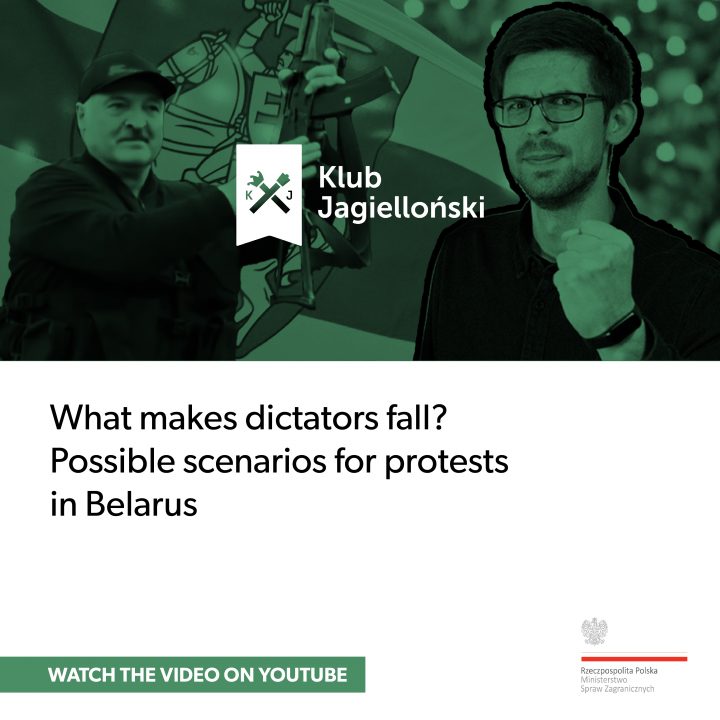 This social unrest has scared the Belarusian leader. He reacted in his typical manner—by neutralising his rivals in the upcoming elections. The first to experience it was Sviatlana’s husband, Siarhei, a Belarusian Youtuber who gained popularity with his channel, A Country for Life (250,000 subscribers—an excellent result for Belarus’s 9.5 million citizens).

This spring, he decided to use his popularity to challenge Lukashenko in the presidential election. He started touring the country and meeting his supporters. However, in May, Siarhei Tsikhanouski was arrested, which prevented him from registering an election committee. That is when his wife entered the game, unexpectedly (even for Siarhei himself) starting her own presidential campaign.

How did a completely unknown, unemployed woman, without any special charisma, manage to build such popularity within a few weeks in an authoritarian-ruled country? The answer is relatively simple: this is where Belarusians’ hopes for change in the country are focused nowadays. There in no one left to choose from. Lukashenko not only eliminated her husband from the race but also two other serious opponents.

Viktar Babaryka, who seemed to be Lukashenko’s most serious rival for a long time, was put in prison. His committee collected an unprecedented 430,000 signatures on the lists of support; although this was less than Lukashenko himself (who was able to use the state machine to collect signatures), it was definitely more than the required 100,000.

That didn’t help much. Babaryka was arrested and charged with transferring money abroad, concealing income, and illegally funding his campaign. He faces up to seven years in prison, and the Central Election Commission has refused to register him as a candidate. The scale of the measures taken may reflect the regime’s concerns towards Babaryka, who, as a long-time director of Belgazprombank (part of the structures of Russia’s Gazprom), may not only have the means to run an effective campaign, but also the necessary contacts with the Kremlin. The latter in particular could have made Lukashenko concerned.

In the Putin’s shadow

Tensions between the Belarusian leader and the government in Moscow have continued since last December when the two countries’ summit failed to deliver plans for their further integration. Since then, Russia has been using various tools, including the oil trade (for many years, Russians sold their oil to Belarus at low prices, supporting the inefficient Belarusian economy) to increase pressure on Minsk. It is possible that it was also decided to make use of the presidential election. There is no evidence that the Kremlin had been supporting Babaryka in any particular way, but his strong candidacy was undoubtedly convenient for them. The business ties of the former director of the bank which was subordinate to Gazprom leave no doubt as to his favour towards Russia. With Babaryka’s arrest, Lukashenko managed to avert the threat.

However, this is certainly not the end of the Putin regime’s ability to engage in the Belarusian elections. Even if the Kremlin is not betting on a specific candidate today, it will most likely remain active in its traditional areas—disinformation and fuelling destabilisation in Belarusian society.

One of the multiple examples of these actions is the spread of the news about Lukashenko’s alleged stroke, which was to follow talks with Russia’s prime minister, Mikhail Mishustin. The report was widely shared thanks to the Russian media, and for hours it fuelled speculation about Lukashenko’s health until he appeared at several public meetings. The situation showed the ease with which the Russian disinformation machine can influence events in Belarus.

However, this does not mean Russia’s actions are aimed at overthrowing Lukashenko. It seems more likely that Moscow is trying to significantly weaken Belarusian ruler’s negotiating position. By feeding the social upheaval, Russia is aiming for a situation in which he decides to send troops and police against the demonstrators in order to pacify them. A Alexander Lukashenko himself seems to be considering the possibility. During his last visit to a unit of the Belarusian Spetsnaz, he stated that he understood the need to keep armed forces ready. These words are, of course, an attempt to intimidate his opponents, but if there were indeed clashes in the streets, Moscow would have achieved its goal: the Lukashenko regime would face condemnation, potential sanctions, and renewed isolation from the West. Therefore, he would have no choice but to embrace Russia and engage in a much humbler dialogue.

The end of Lukashenko?

The upcoming elections are a real test of Lukashenko’s power. The economic problems that have plagued Belarus for many years, combined with the COVID-19 pandemic (disregarded by the president, who recommended vodka and hockey as preventive measures), and fatigue from a quarter of a century of the president’s rule have led to an outbreak of social frustration, manifested not only by protests but also by the massive support for his opponents.

Despite their obvious flaws. Babaryka was not the leader of a people’s revolt, but a Russian-linked banker who bragged about expensive cars and holidays abroad. A ‘fattened bourgeois type’, as Lukashenko (indirectly) described him. Yet, he has gained considerable popularity. Sviatlana Tsikhanouskaya has almost no qualifications to lead the state, and yet meetings with her are attracting hundreds of people.

Her candidacy perfectly shows that today Belarusians will support any candidate who can guarantee independence from the current regime. The arrests of Siarhei Tsikhanouski or Viktar Babaryka and the elimination of counter-candidates by manipulation—as in the case of another serious candidate, Valery Tsepkalo, whose candidacy was simply cancelled by deeming some signatures invalid and refusing to register him on that basis—are all for nothing. There is a serious risk that this time official election results with 80 per cent support for Lukashenko will be questioned by a significant portion of society, and in such a situation the president will face a real dilemma of whether to use the army.

The rallies at which Sviatlana Tsikhanouskaya is accompanied by two other women—Tsepkalo’s wife, Veronika, and Babaryka’s staff coordinator, Marya Kalesnikava—may be a symbol of the regime’s new troubles. The arrests and repressions have proved useless; Lukashenko, against his own intentions, has created a rival for himself and given her public support.

However, hopes of overthrowing the dictator may turn out to be premature. The ease with which Babaryka was eliminated, Tsepkalo was disposed of (he left the country for fear of being arrested), and Tsikhanouskaya was intimidated (she sent her children abroad so as not to endanger them) shows that the game will almost certainly be rigged. Lukashenko still has a significant advantage.

Publication (excluding figures and illustrations) is available under Creative Commons Attribution 4.0 International. Any use of the work is allowed, provided that the licensing information, about rights holders and about the contest "Public Diplomacy 2020 – new dimension" (below) is mentioned.